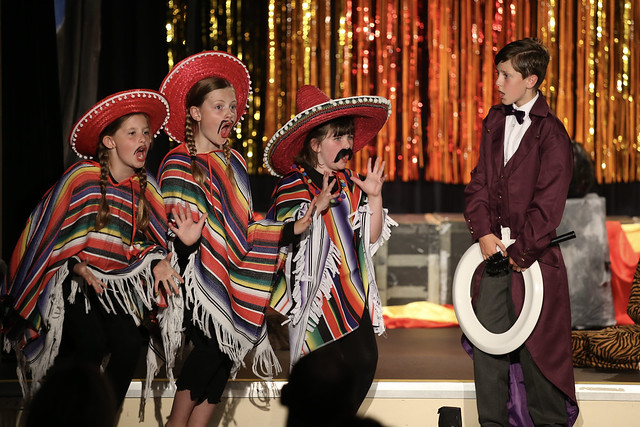 Year 5 and 6 rocked the Prep School Hall last week when they took their audience on a journey, turned back the clocks, and travelled back to the very beginning in their spectacular performance of Craig Hawes’ Rock Bottom.

The curtain rose on an atmospheric, abstract scene featuring an impressive gymnastics sequence choreographed by the children themselves, as the four narrating Timekeepers, Crater (Sophie Wilson), Crystal (Bronwen Rogers), Crevice (Katherine Magiaracina) and Creek (Phoebe Symonds), introduced modern-day planet Earth. They posed the age-old question of human origins and proceeded to take us on a journey back to the dawn of time as the cast performed the exciting and energetic opening number, "Back To The Beginning".

Back in Prehistoric Britain 5000 B.C. we met ‘The Cobblestones’, just an ordinary Stone Age family of cave folk living on Stoney Street, Rock Bottom! But when child inventors Bobby and Betsy Cobblestone (Max Belbin and Janey Godfrey-Faussett) hatched their very first good idea, they were whisked off to work for their idol: the beautiful celebrity -  Lady Lava! (Skyla Mercer).

Little did they know that their new boss hid a dark secret that would rock Rock Bottom to its foundations.

With confident; comedic and characterful acting, a cast of crazy cave folk joined in the neolithic naughtiness and every member of the cast made a full contribution to this suitably riotous production.

The children’s fantastic singing and dancing was accompanied by a live band: Steph Collishaw on keys, Arthur Page on bass and Matt Thorpe on drums. Together they had the audience rocking - and the expert comic delivery of the puntastic script made sure - they were also rolling.

Mr Titley, Head of Prep commented, "Rock Bottom, the children absolutely smashed it! What a fabulous performance. The children delivered every line with clarity and great timing, even the the terrible jokes. It was wonderful to have so many children singing solo's and duets. The acting, both centre stage and in the wings, was of the highest quality. The performance was far from prehistoric; how our budding actors in Year 5 and 6 have 'evolved'"