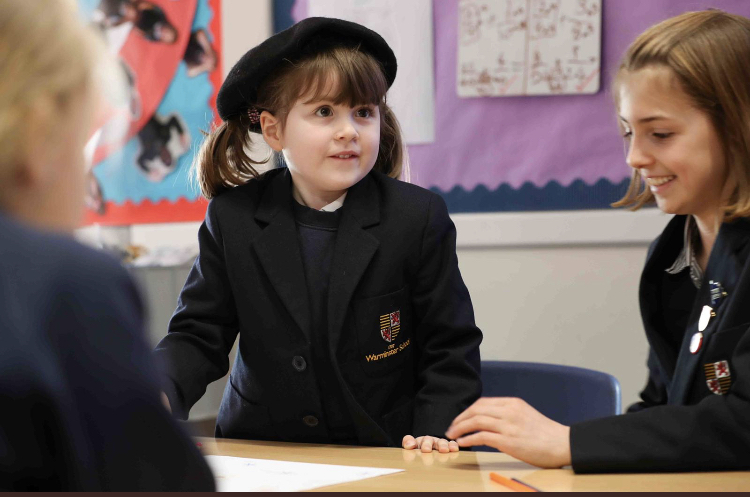 There is nothing more rewarding than seeing our own pupils across the year groups, inspiring and mentoring each other.  Our French morning is a splendid example of this and this year it was the turn of our Year 8 language students to create and lead a range of exciting activities for our eager Year 3 and Pre Prep pupils; the perfect opportunity for them to explore both the French language and culture in a fun, refreshing environment.

It was a merry group of pupils who passed beneath the red, white and blue bunting excitedly hung by our young prep pupils, keen to have had their share in the preparations!  However, before our Year 8’s programme swung into action, there were more treats in store – morning assembly presented by our Sixth Form language pupils as well as a session led by our visiting World in Wiltshire French students from Cognac.

Throughout the morning it was clear that Year 8 had put extensive thought and time into the activities that they had created, all of which were thoroughly appreciated by the children; not least “Le Robot”, a song which lent itself perfectly to actions, with language that was easy to pick up. Even the children’s break time snacks and lunch reflected the French theme of the day! Other activities included Numbers and Birthdays, Weather and Pets and Masks.  There was even a Mardi Gras parade, led by Mr Page and the Samba Band with each child proudly parading their own self-made mask.

A heartfelt ‘merci’ to the MFL department in the Senior School, to our amazing Year 8 pupils, our Sixth Form mentors and to our delightful visitors from Cognac.  Last but not least a very warm thank you to Anna Mortimer, who oversaw the day and ensured that it was truly ‘magnifique’.